Following the long efforts of the national suffrage movement, the first women were finally given the right to vote in 1918. To mark the centenary of this milestone, Killerton, near Exeter, will be telling their suffrage story through the eyes of two generations of Acland women who were at the heart of the fight, but on opposing sides.

Gertrude and Eleanor Acland might have been from the same family but their political views differed greatly. Both lived on the estate during these years, with Gertrude strongly opposed to women’s suffrage while her niece, Eleanor passionately advocated rights for women.

All these years on, Eleanor’s letters provide a rich source of detail about the movement but also exposes the tensions within the suffrage movement. They particularly highlight the division between suffragettes who were willing to break the law to achieve their ends and suffragists who campaigned using constitutional means.

Eleanor played a leading role as a nationally prominent suffragist and was part of the Liberal Women’s Suffrage Union, even exchanging letters with suffragette Christabel Pankhurst advocating a non-violent activism and wrote an open letter in Women’s Liberal Federation News.

“We all agree that militancy has created an atmosphere unfavourable to the grant of Woman Suffrage; this is because militancy has made the women’s suffrage movement appear to be one of sex-antagonism, whereas it is really one of sex-comradeship.” wrote Eleanor Acland in an open letter to Women’s Liberal Federation News in 1913.

Eleanor’s husband, Sir Francis Dyke Acland, was also known for his pro-suffrage views and both he and Eleanor were part of the Liberal political party. Whilst they were both committed to the party and always put it first, the Liberal’s anti-suffrage stance did present problems.

For Eleanor, her position was tested when the National Union of Women’s Suffrage Societies asked her to withdraw support from her Liberal MP – who happened to be her husband.

“I should very much like to know what is the true explanation of the action of those Liberal women who in spite of the strong refusal by government to grant the vote to women, continue to support the Liberal Party. I can only think your policy is a very unwise one.” said Christabel Pankhurst to Eleanor Acland in 1908.

Eleanor remained loyal to both her party and her pro-suffrage husband, and played a leading role in the Liberal Women’s Suffrage Union which aimed to change the party’s views.

“We want to prove that Liberal women are sane, hard-headed and practical,” she wrote in an open letter to Women’s Liberal Federation News in 1913. In later life, she became increasingly political and even ran, albeit unsuccessfully, as the Liberal Party candidate for Exeter in 1931.

These differing views of Killerton’s women make their story one that is fascinating all these years on. To mark this, the exhibition Branded: Fashion, Femininity and the Right to Vote will arrive at Killerton from February 2018 and explore the suffrage movement through fashion. As well as this, the downstairs of the house will tell the story of the Gertrude and Eleanor Acland. 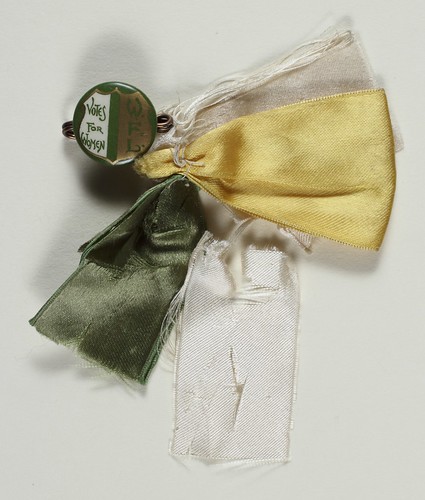 After taking a year’s break for the roof project, the much anticipated return of the fashion exhibition will bring Killerton’s suffrage story to life and contextualise the wider story of the women’s movement.

It will explore how suffragettes were early proponents of political branding and how women’s fashion became politicised during the campaign for women’s suffrage - for example how suffragists wore feminine clothes to avoid caricature, and how women campaigners have subsequently employed dress as a political act.

“Many suffragists spend more money on clothes than they can comfortably afford, rather than run the risk of being considered outré, and doing harm to the cause,” said Sylvia Pankhurst.

The exhibition will include a suit belonging to Nancy Astor, the first woman to take her seat in parliament, a handbag carried by Jessie Barrowman, who was arrested during an infamous window smashing campaign, a dress by Amy Kotze, a designer employed by the Pankhursts, and a dress worn by Queen Victoria, who opposed women’s suffrage.

Killerton will play host to Branded: Fashion, Femininity and the Right to Vote

Branded: Fashion, femininity and the Right to Vote is part of the National Trust’s Women and Power national programme. Killerton will be hosting a series of events throughout 2018 as part of the programme including a partnership with the National Portrait Gallery. Visit nationaltrust.org.uk/killerton for all the latest information, news and timings.

5 edible flowers to grow in your garden

Why I want my children to grow up in Devon