How long will it be until Exeter’s Royal Clarence Hotel reopens?

How it'’s hoped the new, restored frontage will look

It’s been a year since one of the largest fires Exeter has ever known destroyed one of its most iconic landmarks. But the Royal Clarence Hotel is slowly coming back to life, as Chrissy Harris discovers

The first 999 call came through at 5.11am. A fire had started in the art gallery at 18 Cathedral Yard, Exeter and was taking hold fast. Within minutes, flames were sweeping through to the nearby timber-built 18th Century Royal Clarence, said to be one of the oldest hotels in England.

By 6.35am, 20 fire engines were at the scene of this now major incident, which would completely devastate the Royal Clarence and change the landscape of the city forever.

Thanks to the heroic efforts of more than 150 firefighters, plus police and ambulance crews, no one was hurt during the blaze, the largest seen in Exeter since the Second World War.

But there was a tremendous feeling of sadness that part of the city’s heritage had been so utterly destroyed.

“My first glimpse of the remains of the building was heart-breaking,” says the Royal Clarence’s owner Andrew Brownsword, describing the events of October 28, 2016. Alongside Exeter’s residents and visitors, we shared a huge sense of loss of such an iconic building.”

At the time, it was difficult to see how the Royal Clarence could possibly be salvaged and demolition work began soon after the fire was out.

A year on, however, the mood has shifted to one of rebuilding and restoring, with Andrew and his team recently announcing plans to recreate the hotel’s historic facade with a new, modern structure behind. Morale has also been boosted by the discovery of the building’s medieval features, previously hidden under layers of plaster.

In February, a wall decoration of a peacock similar to other examples seen in Exeter was found on a section of timber. Moments like this have helped to bring some much-needed positivity to a building project that was initially all about what had been lost.

“It’s wonderful after the heartbreak and months of deconstruction to start to look towards the future,” says Andrew Brownsword, who is full of praise for his colleagues, structural engineers Thomasons, Exeter City Council and the wider community for helping to support the rebuild.

Another look at the future plans for the restoration

“Our aim has always been to preserve as many surviving features of historic and architectural importance as we can and, where possible, incorporate them into the rebuild.

“I’m delighted that the new frontage includes restored features, such as the distinctive iron work and stained glass windows.”

The Grade II-listed Royal Clarence was built opposite Exeter Cathedral in 1766 and was originally called the Assembly Rooms. The former coaching inn was renamed after Adelaide, Duchess of Clarence and wife of the future King William IV, stayed there in 1827. 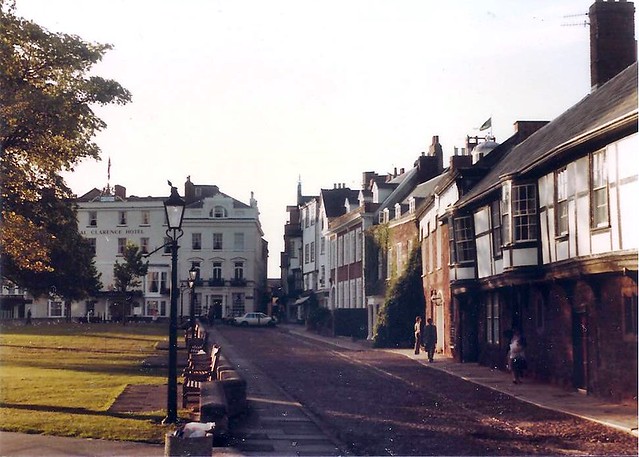 Other distinguished guests at what’s thought to be the first property in England to be called a hotel have included Admiral Nelson, Beatrix Potter, Thomas Hardy and Clark Gable. “It’s something that is so important to this city,” says local historian Darren Marsh, who has just published a book on the Royal Clarence.

“People say it was just a building, just a hotel but it was so much more than that. It was a place of reference to give people directions, a meeting point. Since the fire many people have said to me that they never went in – they couldn’t afford to! But it was comforting to know it was there.

“Losing it has been gut-wrenching. I couldn’t bring myself to go and see it after the fire for about a week and I know other people were the same.”

One of the stained glass windows that was saved

The rebuild is expected to take around 18 months and it’s hoped the Royal Clarence will be open for business again in 2019.

Plans for the interior are currently being put together and some of the first rooms are due to take shape in the coming months.

The hotel before the fire

Andrew Brownsword says a building with such ‘star quality’ deserves to be properly looked after. “It is so important to the people of Exeter because nearly everyone has a personal association with it – whether you’ve celebrated there, stayed there, worked there or simply relaxed on the lawns outside,” he says, adding that his family celebrated his youngest daughter’s graduation at the hotel.

“It’s therefore important that we return the Royal Clarence to the people of Exeter, ensuring it’s a hotel able to host a new generation of celebrations and to restore one of the city’s most important tourist sites back to it’s former glory.”