Now is the perfect time to head for the bright lights of Exeter, where you can hunker down in one of the city’s many pubs, cafés and indoor attractions. Here’s our pick of the best places to keep warm, dry and entertained | Words: Chrissy Harris

We'll start with the obvious. This magnificent building dates back to medieval times and boasts some of the finest examples of decorated Gothic architecture in the country.

You can take guided audio and virtual tours to discover the Cathedral's fascinating history, all of which are included for free in the cost of admission. 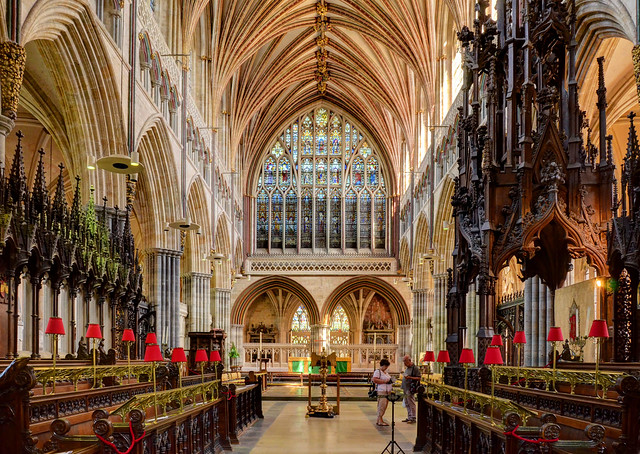 Located on the ground floor of the old Dean Clark's Hospital's Halford Wing, this eccentric spot offers food and drink in some rather special surroundings.

You arrive through what was the hospital's chapel entrance where you'll soon spot the operating table-inspired bar and striking mix of oil paintings, taxidermy and reclaimed furniture. There's even a 'snug', a Victorian tarot card reader-themed room. Cosy!

This little coffee house is hiding in plain sight, doing it's own sweet independent thing near all the big boy chains.

Serving speciality coffees, cakes and sarnies with a smile, it's a really great place to escape all that hustle and bustle.

No trip to Exeter would be quite complete without paying a visit here. The world-class museum hosts incredible displays, revealing the city's rich heritage, as well as its global connections.

There's a life-sized giraffe in here, kids - that's one way you'll be guaranteed to keep their attention for a little while.

Eat, drink and play a round of Scrabble. It's the perfect way to while away a wet afternoon/evening with family and friends.

Board boasts an extensive library of games, as well as a team of 'game gurus', on-hand to help with any rule disputes. Food and drink can be brought to your table to fuel the fun.

6) The Mill on the Exe, Bonhay Road

This former paper mill is a popular riverside dining spot all year round but it's cosy in the winter.

Take in the views over the water from the comfort of the large but well thought-out St Austell Brewery pub, with a log-burner and fire pit to keep you toasty. The food is locally sourced, where possible. Families welcome.

No amount of weather can get to you when you're nearly six-feet under. Explore the city's hidden network of medieval passages, which once housed the city's water network.

Dark, narrow and not for the faint-hearted (or the under fives), the underground passages are a true archaeological wonder.

It's worth taking a trip just outside the city to visit this Grade-II listed pub, said to be the first pub that the Queen ever visited. The Bridge Inn is cosy because there are just two rooms, with the old Maltings acting as an occasional overspill bar.

Run by the same local family for more than a century, the pub has been described as 'museum with beer'. The six ales here come straight from the cask and change all the time.

Named after the famous British film maker, who died in 1991, this world-renowned research centre houses more than 75,000 items of film memorabilia and movie making equipment from the 17thcentury, right up to the present day.

Immerse yourself in a fascinating collection of artefacts related to cinema and optical entertainment.

You can enjoy hanging out at this well-established city gastro pub and help the planet, too. Win-win.

Witchcraft: The city witnessed the hanging of the last woman convicted of witchcraft in England. Recent research also suggests Exeter may also have been the first place to execute a 'witch', as early as 1566.

Forest giant: The tallest tree in Haldon Forest, just outside the city is a Douglas Fir. It measures 42 metres high - and counting.

Slow progress: Traffic-wise, Exeter is one of the busiest cities in the UK during peak hours. Drivers spend at least 25 per cent of their time in congestion and the average driving speed through the city is just 4.6mph.

Education matters: Exeter College was established in 1970 as the first tertiary college in the UK, bringing together the former grammar schools' sixth forms and Exeter Technical College.

Moving house: In 1961, an entire 16th century Tudor house in Exeter was moved on rollers to make way for an inner by-pass. The timber-framed building is has been known as 'The House that Moved' ever since.

Through the keyhole: amazing new hew home couple built in their Membland garden

Devon cider maker sells pints in aid of the donkeys